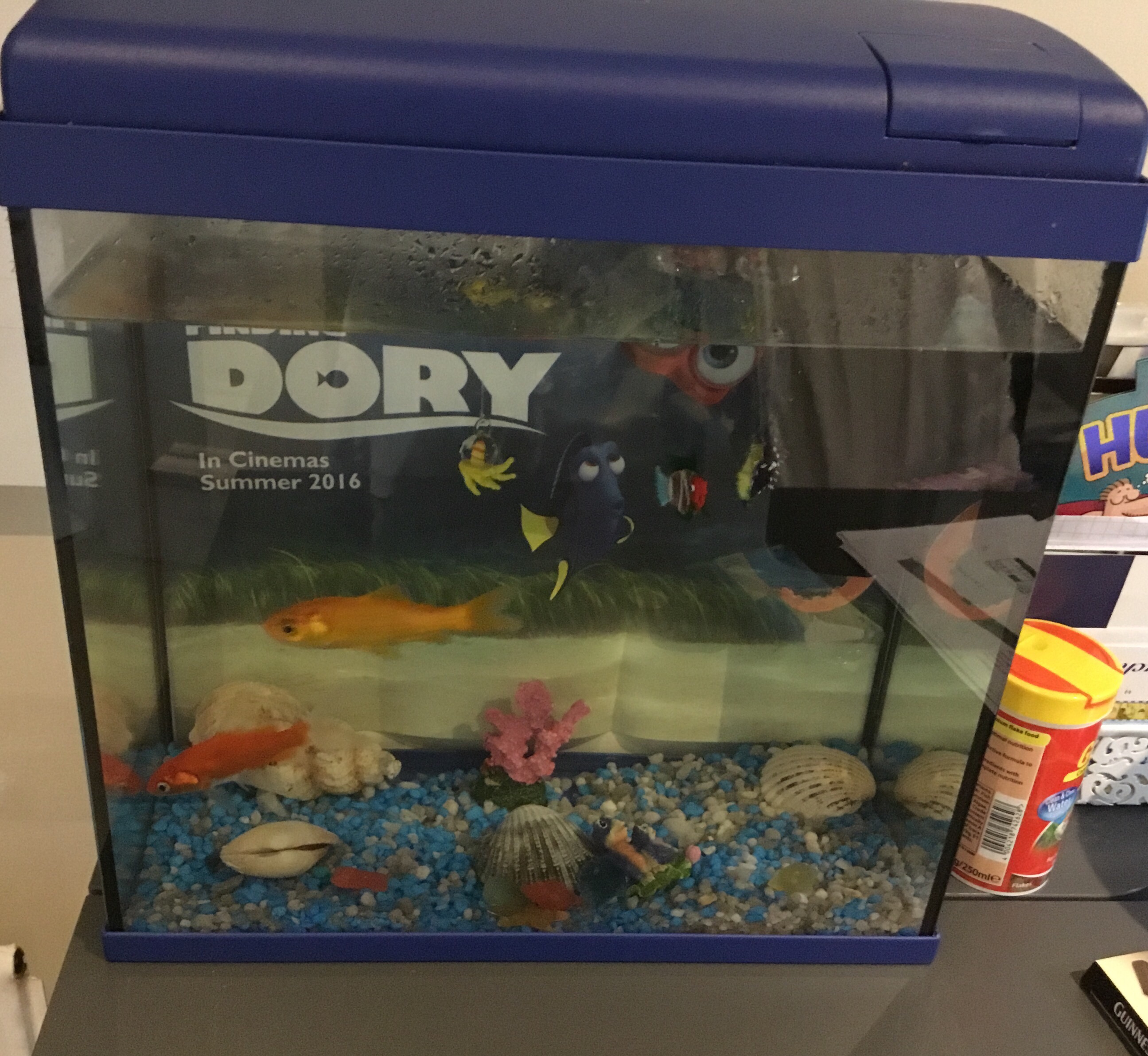 I am a dog and a cat person, basically I like fury pets I can interact with but I have to say I started to warm up to this fish business too. I bought my first 2 fishes when my eldest daughter graduated from Montessori and they lasted forever!!!!I had these memories of when I was a child that gold fishes never lasted long and they were constantly flashed down the toilet so I didn’t have big expectations.Horace and Jasper instead,lived with us for 4 years and one of them also lied eggs.I didn’t even know it was possible.Eggs didn’t survive !Horace ate them all and from that day Jasper became Jaspera!After they died,we didn’t replace them,busy moving house but soon after settling in the new house the request arrived and I immediately said yes. I think I missed to see the bowl in my kitchen and the dogs looking curiously through it.We went to the pet shop and got 2 gold fishes.When back home I went straight into the shed to get the old fish bowl.I was sure it moved with us.It didn’t. I looked everywhere but no sign of the fish bowl and still I can’t remember to throw it away but there was no way I could find it.It was not at home.By the time I finished the search it was 6 o’clock in the evening that means the shops were closed ,it was too late to buy a new one.For the night, we had to improvise and left the fishes in a kitchen bowl.When we got up in the morning,one of the two was lying dead on my kitchen counter. It jumped out.

Not much for a good start I thought. Girls of course were disappointed and fighting over whose fish died .I didn’t want to risk the remaining fish to jump out as well so I covered the bowl with some foil and pierced it for air.After dropping the girls at school and walking the dogs I went back to the pet shop to buy an other fish and a new fish bowl. I bought a little aquarium instead,that, I discovered it is much less work then the common fish bowl we had before.The trick is in in the filter that keeps the water recirculating so that it is sufficient to clean it every 3/4 weeks. Fantastic.

I went home set it up and decorated with coloured stones ,shells and a couple of little statues and put the fishes in. When the girls came back from school,they were delighted.Looking after the fishes is now their job,I only help with cleaning the tank.Robert and Apollo seemed doing fine until one morning we found Apollo dead.

When we went to the shop to get a new fish and told what happened they said that probably Robert bullied Apollo being considerably bigger.The pet shop boy made sure to give us a fish at least same size of Robert.Frederick arrived home.

Things were good for a while until one day ,Frederick was floating dead too.

Here we are at the pet shop again.I was nearly ashamed to ask for an other fish.

They must think we are eating them or smuggling them or,even worse,using them for illegal experiments. The pet shop boy this time made us lots of questions about the water ,may be Frederick died because of a lack of oxygen.He suggested to keep an eye if they were mainly staying in the upper part of the tank(apparently it is not a good thing as it means they are looking for oxygen). We went home with a very nice fish,red and white,big size to confidently fight Robert back.Freeda we called it.It had to be a female fish,she had lipstick.Yes lipstick!It had in fact this little red stripe just above her lips that really looks like lipstick.Freeda turned out to be a tough girl: so far she was the one surviving Robert the longest ,despite the fact we noticed few time Robert snipping at her and chasing her tail.During the holidays ,we left our fishes with some friends.We have the agreement to mind each other’s aquatic little friends whenever we are away and thankfully so far it never happened we were away at the same time.Back home from summer holidays,we went to collect Robert and Freeda and we received the bad news: Freeda died few days before our return,they haven’t said anything to us to not ruin our holidays.My friend was mortified but I knew it was not her fault.It was Robert who killed her.Three fishes over one year dead in the same tank with him it is not a coincident:he is a bully and a murderer.We are now convinced that also the first fish didn’t jump out from the bowl but it was probably pushed out. So here we are at the pet shop again.Explaining to the pet shop boy we had an other loss.He gave us the biggest gold fish he had,but also told us to keep an eye on them .He also asked us if we notice little bites on the other fishes tail but we didn’t,we actually didn’t check but we saw Robert chasing them we said and he promptly replied that most probably Robert is a pathological hungry fish(we now have to feed them every day rather then every second day)that bullied his companions for food ,he told us to check on how it behaves with Patricia (the new fish)but if she doesn’t make it either then Robert must stay on his own in the tank.It must stay in a “isolation tank”.Obviously “sharing is caring” means nothing to Robert.We have a murderous ,sociopathic fish!

2 thoughts on “The killer fish”